The message Four of Diamonds are sending out is important in the current climate of pop, culture, the world. Empowering, unique and fun – not to mention talented – the four girls, Caroline Alvares, Yasmin Broom, Lauren Rammell and Sophia Saffarian, are doing something that is a step away from the usual pop sphere. The first all-girl band to be signed to Virgin since the ‪Spice Girls, the four bring vibrant positivity and a modern agenda of woke-ness to their music. 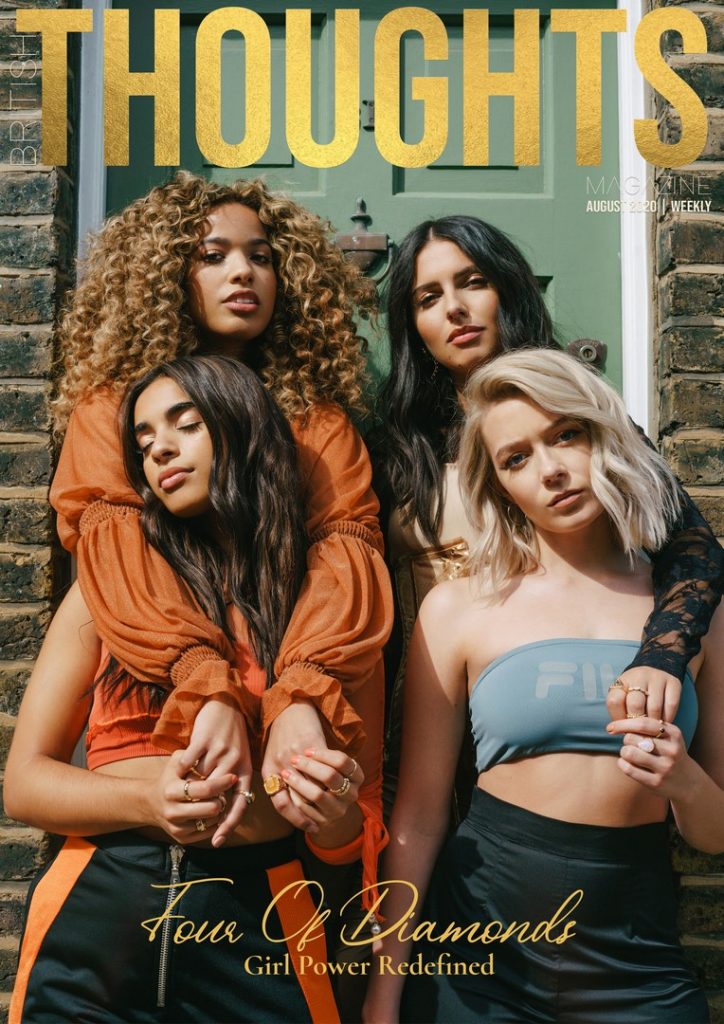 In 2018 they released singles with global superstars Saweetie and Burna Boy.

Earlier last year, they supported RITA ORA on her UK arena tour, and had a big summer of festivals; including supporting ARIANA GRANDE  (Manchester Pride) & STEVIE WONDER/LIONEL RICHIE (BST Hyde Park, London) as well as having sold out their own headline shows.

Across their singles to date, they’ve had over 15 million streams combined.

Their last release was a collaboration with DJ Joe Stone – its a reworked version of the 90s hit by Jamelia -Superstar.

The girls latest release (May 29) is single THE WRITER featuring rapper Mr Eazi. It is co-written by JONAS BLUE & GRACEY and produced by MARK RALPH.

Latest TikTok challenge had over 31million hashtag views for their #wearethewriters campaign.

Where did the name four of diamonds come from?

Lauren Rammell – It was actually from literal cards. So, we were on a really tight timeframe to come up with a name for the band when we got to put together, and they were literally like “we need a name by the end of the day to be submitted.” Did someone have a pack of cards?

Sophia Saffarian – Was it Christian?

Lauren – Yes, our choreographer had a pack of cards and we were trying to think of the best hands. There were things like “Ace High” and we thought that sounded a bit cringe, then we thought of “Four of Hearts” and were like, “actually, diamonds; ‘Four of Diamonds.’” It was literally from the cards. That’s why our logo is more like the one from the cards. 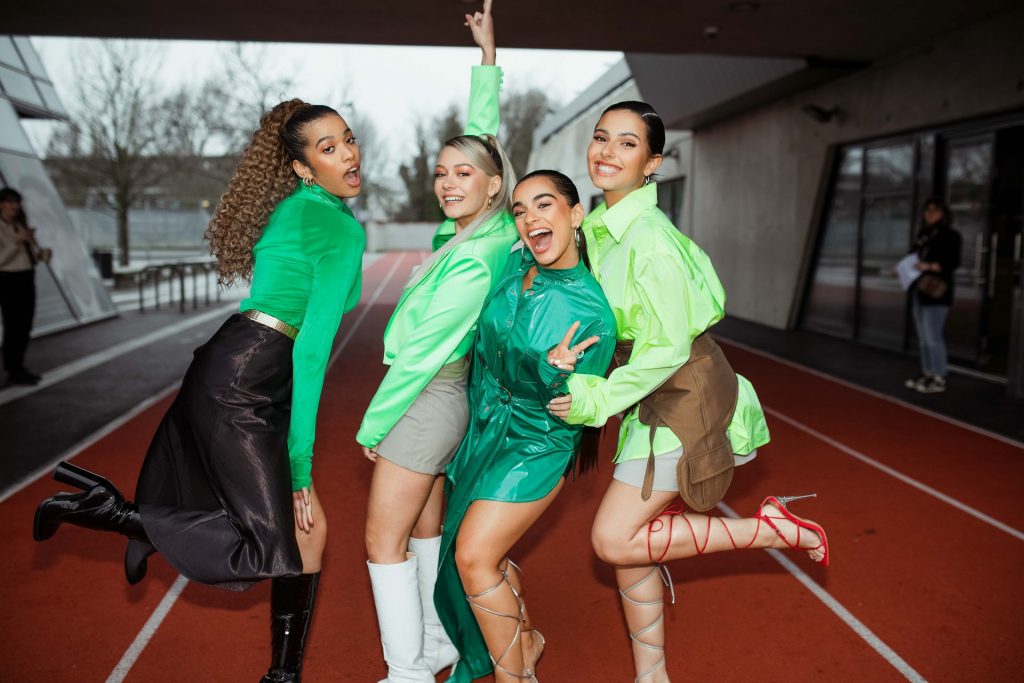 Do all of you remember the first song you ever sang when you were growing up?

Yasmin – Yea, I do remember it. It was actually a Pussycat Dolls song. I can’t remember the name of it. *starts singing song

Caroline Alvares– “I Hate This Part”

Sophia – I can think of two I use to sing on the karaoke machine. One was “Girl” by Destiny’s Child and “The Voice Within” by Christina Aguilera, which we actually sang on X-Factor.

Caroline – I’m the same as Sophia. Not the same songs, I was just also on the karaoke machine with my sister. I remember singing “Lady Marmalade” by Christina Aguilera, Lil Kim, Mya and Pink. I LOVED that song, we’d make up dances; it was a tune.

Lauren: I think mine’s an old song. At the time, it had been redone by someone called Zoe Birkett, it was called “Get Happy.” That was my first song. 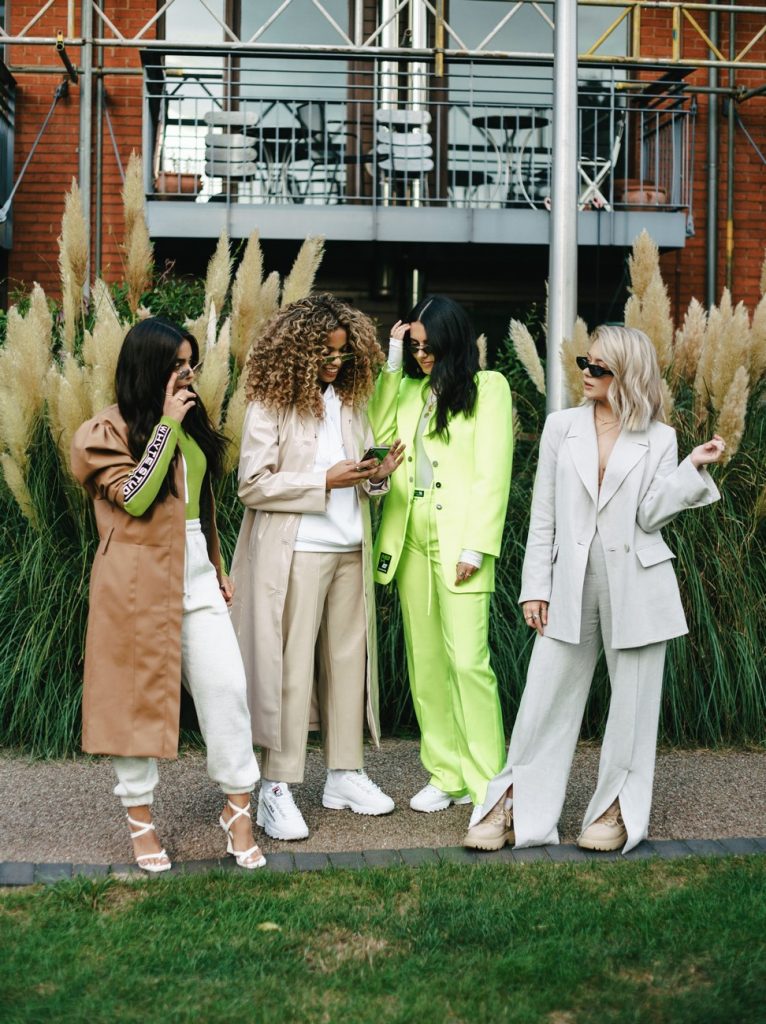 When it comes to musical style and vibe, who amongst the great singers and musicians do each one of you try to take inspiration from?

Caroline – I love Christina Aguilera. I’ve always loved her songs so a bit from her and currently, I would say J. Balvin. I just love this new era, his style, and everything that he’s bringing into the industry.

Lauren –  We all know I’m a Beyonce superfan, so Beyonce. Destiny’s Child was around when I was little as well and then big powerhouses like Whitney, and Jessie J is a more current one from the UK.

Sophia – Obviously Alicia Keys is up there for me but I think I agree with Lauren – Destiny’s Child 100%. I use to want to be one of them, I don’t know what young girl didn’t. India. Arie is another one. I always used to sing her songs when I was younger and I love everything she stands for.

Yasmin – I have so many but number one has got to be Rihanna. I love all of her music and the way she dresses. Everything about her is just amazing. Everyone that knows me knows that if there was anyone that inspires me the most, it’s Rihanna.

If you were to use one word to describe each other’s role in the group what would it be?

Caroline – Sophia is definitely the chatty one; super-talkative. During any awkward situation where no one knows what to say she just has the words for it.

Lauren – She’s a handy member in that sense 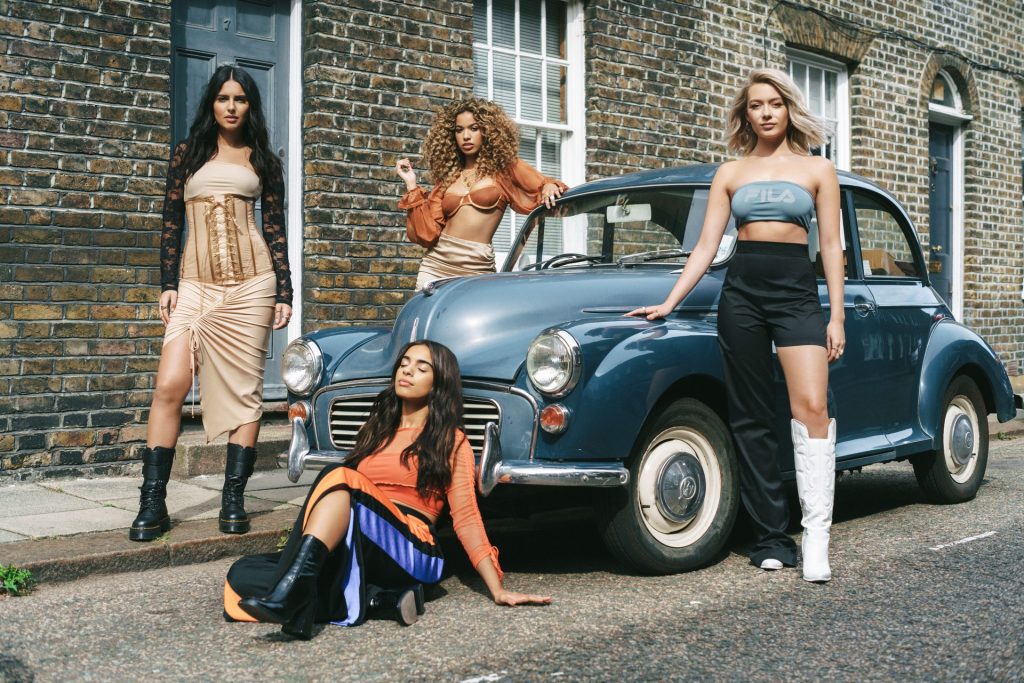 Collectively, if there was a chance to collaborate with any of your dream artists who would it be?

Sophia – Yas, you said Post Malone the other day. I think that’d be really cool. Justin Beiber would be cool.

When it comes to your music and vibe, what is Four of Diamonds all about?

Sophia – I think it about empowerment, whether that be female empowerment or just believing in yourself. I also think we’re strong and passionate.

Caroline – Girl power and feminism. There’s not enough girl bands out there or ones that can really embrace their individuality; just being yourself and unique but also a strong team.

Lauren – And love and equality for everybody. There’s is no one that’s not included in Four of Diamonds’ fandom.

Since being signed to Virgin EMI, Four of Diamonds has been called the Spice Girls of this generation, as a girl group — what sets your style apart from the other acts?

Lauren – I think it’s uncommon in any workplace to go on with everyone that’s you’re put into a team with. Four years later and we’re literally best friends. We’ve never fallen out and we love each other. That’s what sets us apart – it’s real.

When it comes to creativity, especially during such a crazy time in the world right now, how do you help each other out if one gets into a rut? 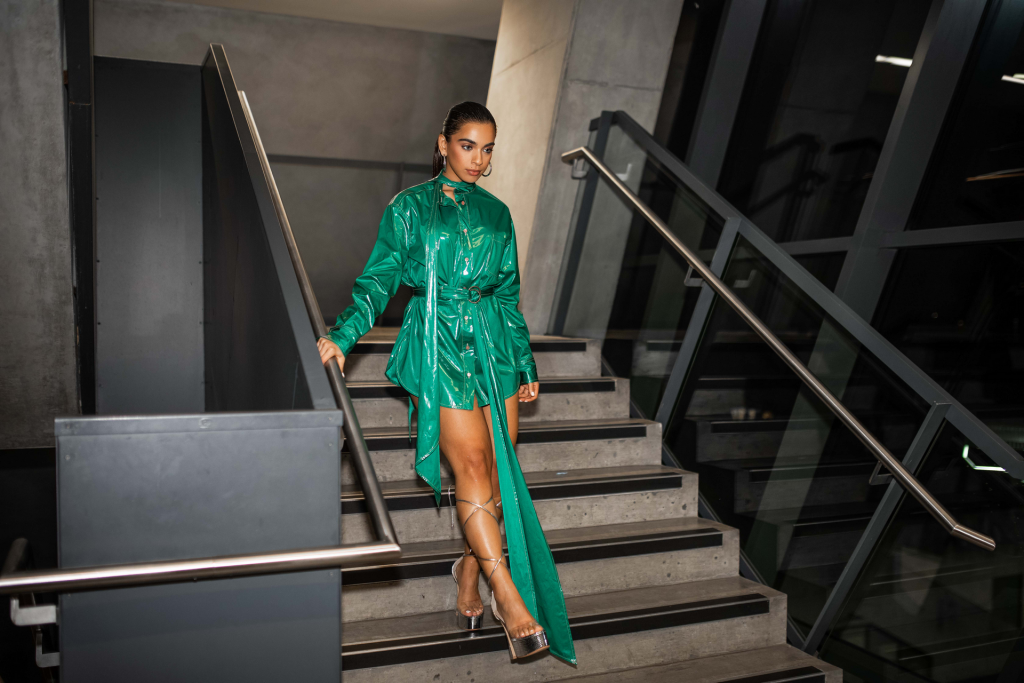 Sophia – You know those funny challenges going around? If anyone sees a funny challenge they’ll send it to the group and say “guys we should do this!” Like that pillow challenge, that was ridiculous.

What are your thoughts on the music and entertainment industry moving forward into the near future?

Sophia – Hopefully, like everything else in life at the moment, it’s kind of seen as a reset period and things like racial inequality or gender biases and things like that that are apparent in the industry might get addressed because people have had time to sit down and think and notice things that aren’t quite right. I think it’s also a time to embrace the artists and the people behind the scenes who have worked hard all through it to keep it going because musicians don’t stop and neither do the people behind them, so I think it’s important to be appreciative of that as well. 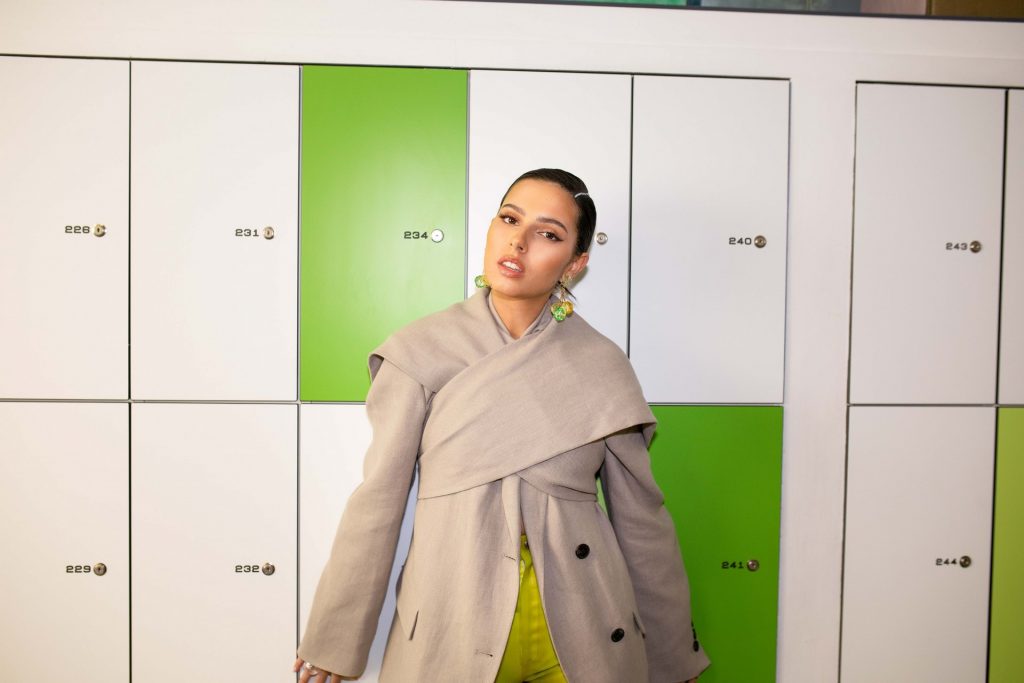 Lauren – I think it’s a really important time and I think it’s great that all of these issues are being brought to the forefront because I feel like in terms of acceptance we were heading in the right direction for the past few years. I think transgender and non-binary has been talked about and in the media more when it never was before and way more accepted; that’s due to people talking about it. I think it’s a real shame that, with racism, everything may have taken a dip this year but everything’s that’s been happening has been good – it’s being spoken about, it’s being addressed and people are being called out if they do make remarks or do something wrong. People are speaking up and I think that’s one of the good things this year has brought.

Caroline – I think there’s going to be a whole new avenue in music in the sense that we’re going to have a whole new virtual world. This pandemic has made a lot of businesses suffer in terms of live music; a lot of people a basically jobless now because they worked in live music and that’s not happening at the moment. So, I think we’ll have this whole new world of virtual music and virtual concerts, as well as stuff from the past like drive-in shows. I think that’s so cool and there are silver linings in everything and I think this will really be one for the industry.

Yasmin – I think 2020 is like a reset year. As bad as what has been happening is, I feel like it needed to happen. It’s brought so much to light and maybe if Corona didn’t happen it wouldn’t have been as big of a focus. So, I do think things will flourish a lot more in 2021. I think the music industry has changed but maybe it’s for the better. We’ve adapted so much already so what’s to stop us from adopting more.

Lastly, What are your tips for the budding singers and artists who are eyeing to have their big break?

Yasmin – My biggest tip is to not listen to what anyone tells you; if you believe you can do something then you can do it. Believe in yourself constantly, if you believe that something will happen then it will. Trust your path, don’t force anything and just go with the flow, if it’s your destiny it will happen. 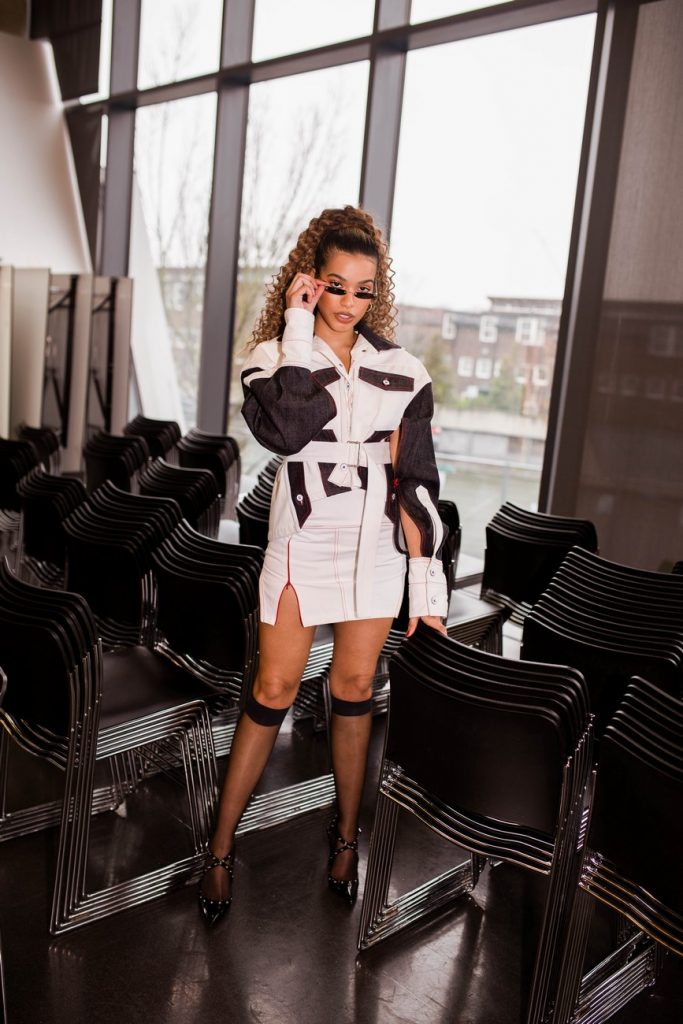 Caroline – My advice would be to be really thick-skinned because the music industry is a hard nut to crack, so you have to be strong, believe in yourself, and don’t give up. There’ll be a lot of obstacles along the way but you just have to ride through them. Things change all the time and you never know what’s around the corner but you just need to adapt and like everyone says now, “we move.”

Sophia – I would say to be authentic and true to yourself is really important. I think that it’s very easy to lose with yourself in an industry like the music industry but if you can stay true to yourself and listen to your gut, in my eyes that ultimately helps you on your journey to happiness. If you’re happy then no one can stop you.

Yasmin – Never fear rock bottom. After you hit rock bottom the only way is up and all the greatest artists always tell stories about how they’ve hit rock bottom or been dropped or been told “no” so don’t fear that because what is meant to be will be. 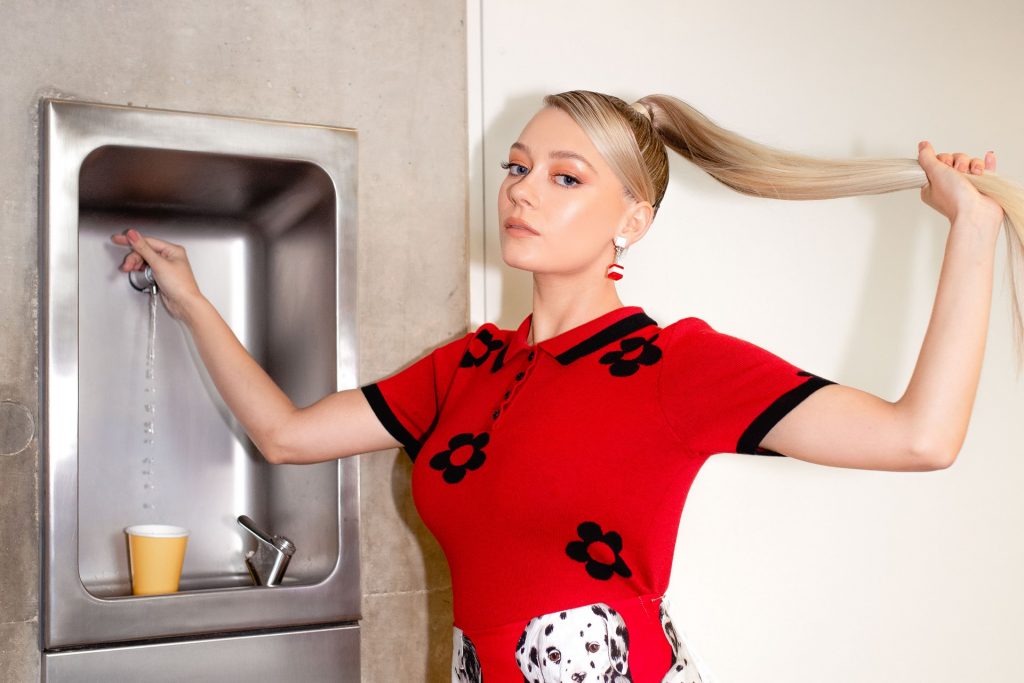 Being in this COVID time, things have changed in that people can pave their own way with live shows and things of that nature. Would you say it’s a new way of thinking?

Sophia – I think people are more understanding. We’ve all been in the same boat in some way or form for the past few months, whether it’s mentally, financially, or however. Everyone is a lot more accepting now and a lot less judgment, which is great.

Lauren – I just love how in every single industry we’ve just evolved and adapted to this “new normal.” We could’ve just sat there and done nothing but nobody’s done that, everyone’s adapted and created new ways to get things done Humans are just brilliant.